How the vampire ruled Romania.

Resources
If there was ever a place where the vampire legend ruled over the country and dictated what everyone did from sun up to sun down it is in Romania. Here is where the vampires got their start and many myths and legends came from. In the upper center of Romania is Transylvania; the birth place of the most famous vampire in creation: Dracula. It is in Romania where the vampire myth rules over everything the people do and say. Romanians have very precise rules and regulations when dealing with vampires. It is also where we learned how to identify, destroy and prevent them from existing at all. The Romanians call the living dead Strigoi or Moroi meaning "nightmare." There are two classifications of Strigoi, the living and the dead. 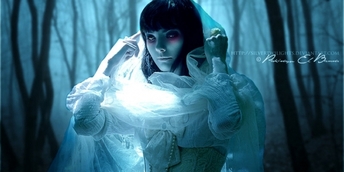 LIVING STRIGOI
Living Strigoi are known to be witches that have two hearts or souls (sometimes both). These vampires have souls that they send out at night to communicate with other Strigoi and drink the blood of livestock and people. The living dead are also called Moroi since they become revenant after death (return). The Strigoi will drink the blood of someone from their heart or between their eyes. Female Strigoi can come back and actually marry and try to lead normal lives, but they will soon exhaust their husband with their sexual appetite if they haven't killed them already. Male Strigoi can have children called Dhampirs. These children can grow up to detect and hurt vampires.

DEAD STRIGOI
Dead Strigoi are actually reanimated corpses that will come back to suck blood and attack their families. These creatures do not have souls just their outer shell.

Roman people in Kosovo
People from Kosovo believe that a vampire is invisible but can be seen by twin brothers and sisters born on a Saturday who wear their clothes inside out.

People to return as a  Vampire after death
-Born with a Caul, extra nipple, tail, or extra hair
-The seventh son of the seventh son ( seventh sister to seventh sister)
-Born to early
-Someone whose mother crossed paths with a black cat
-If a pregnant women did not eat salt or gazed upon a witch or vampire her child was then doomed
-Child born out of wedlock
-Unnatural Death
-Was bitten
-Died before they were Baptized
-If you had red hair and blue eyes
-Died alone and unseen

People who were born doomed could seek blessing from the church and be Baptized. You would then be spared the fate of reawaking. Other things that could become vampires were: Dogs, Cats, Plants, and Pumpkins or melons if they were in the house to long. They would start to move and make noise or show blood. If there were sudden deaths then the people knew a vampire was in the area. After someone was buried the Romanian people would go back to their grave after a few years and dig them up. They would look for signs of vampirism and if they found any they would kill it. If not they would wash and rebury it.

Romanians used these repelling techniques every Easter and during the feast of St. Andrews and St. George because these are the times that the vampires are at their strongest.

Analysis
Though the Romanians started the myths and legends some of them have migrated into the myths and legends we know of today. For instanse the staking of the vampire in the chest and the decapitating and burning of the body are the three of the ways that we think of now-a-days to kill a vampire. Some superstitions of keeping a vampire away that are still around is putting garlic around your house and a cross on your door. They are repelled by the garlic and are creatures of hell so the cross wards then off. In novels and movies vampires can't touch a cross without being seriously burned. Unlike what we think about vampires today is about them leading normal lives and marrying people. To us all they are are killers and they can't go about a normal life. The fact that the vampires could have children is also strange. In some novels and books that would be impossible. But there are others that shed light on the fact that they can have kids and fall in love with someone. Now-a-days if you want to tell who is a vampire you look for someone who doesn't cast a reflection, cold skin, beautiful, pale skin. And unlike back in the day we don't check the graves of people who have died to see if they have risen again. To us the vampire is just a legend that is not true but in movies and books. But to these people the vampire was like their bogyman they thought that it was real and they shaped their lives based off of their beliefs.