The grotesque and mutilated night dweller of Asian Culture.

Resources
While the classic vampire may or may not have influenced local vampire tales in Asia, legends from the East tend to be rooted in older myths that don't share as many qualitative similarities to the Count.  A common theme in Asian vampiric folklore are grotesque figures of the night that haunt the living via displays of detached body parts.  There is an interesting paradox between European and Asian vampires in that the western vampire character is almost exclusively male and preys upon young women while Asian vampires tend to be female.  Many of these female vampires disguise themselves as attractive young or old women by day and then transform into hellish demons at night.  Another prevailing theme is their choice in prey which tends to be children, sleeping individuals, or pregnant women and virtually every Asian demon is active during the night.

The Bhoot is essentially a soul in purgatory whose physical body died an untimely or violent death.  It is a nocturnal creature that ambles through the night, particularly in cemeteries or other derelict places, reanimating corpses and attacking the living.  A Bhoot attack normally results in a severe ailment or death.

The Brahm Rakshas (northern India), is a malevolent demonic spirit originating from a high caste individual known as a Brahmin who either committed evil deeds during his life or misused his knowledge for ill.  While it's physical descriptions vary, the Brahm Rakshas nearly always possesses gruesome characteristics such as it's head being enveloped by intestines or two horns protruding from it's forehead.  It is worth noting that the Brahm Rakshas are not wholly despised as there are many temples and effigies devoted to them. 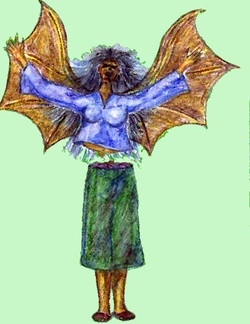 Aswang is a Filipino term that is applied to many variations of demons, spirits, vampires, and the like.  Two particular aswang are of particular merit in Filipino folklore:

The Mandurugo, meaning "blood-sucker," takes the form of a beautiful girl by day and sprouts wings and grows a long, proboscis-like tongue by night.  It's diet consists of human entrails, the mucus of the ill, and even the fetuses of pregnant women.  The Tagalog ethnic group of the Philippines tell a story entitled "The Girl with Many Loves" that describes a gorgeous sixteen year old girl who marries rather husky men who continuously wither away into nothingness.  Her fourth husband awakes one night to feel something pricking his neck, prompting him to stab the unknown source of pain with a close kept knife.  His wife is found dead the next morning not far from their cottage with a knife wound to her chest.

A similar creature to the Mandurugo and probably the closest to the Western vampire is the Manananggal, literally meaning "self-segmenter."  The Manananggal is a beautiful old woman able to detach her winged upper body and prey on sleeping pregnant women, consuming their unborn children and drinking their blood.  While it's upper body wreaks havoc, the lower body is left unattended and it is said that sprinkling crushed garlic or salt on the lower half will render the Manananggal incapable of returning to it's earthly form, effectively killing the creature. 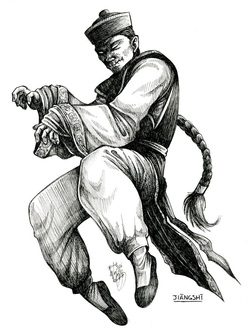 A fair amount of information is in circulation regarding the legend of the Jiang Shi, more commonly known as the Chinese "hopping" vampire.  There are many ways to procure a jiang shi, however the most common methods include:
-the use of supernatural means to resurrect a corpse
-supernatural possession of a dead body
-when the soul of an individual cannot escape the body due to an improper death or suicide

The appearance of a jiang shi is more analogous with the modern interpretation of the "zombie," as its arms protrude outward and its legs retain a stiffness that renders it incapable of normal walking, hence the "hopping" part of its name.  Depending when a jiang shi is raised from the dead, it might appear as healthy human or a corpse with molding greenish flesh.  A jiang shi will rest in a coffin or another dark place during the day hours and will rise during the night to leech off of a victims qi (life essence).

As there are many means to conceive a jiang shi, so are the numbers of methods and provisions used to combat a jiang shi that range from the sensible to the downright bizarre:
-interestingly enough, mirrors can used to contest a jiang shi as they are frightened by their own reflection
-an axe
-fire, not unlike the classic vampire
-vinegar
-a copy of the I Ching
-the blood of a black dog
-hooves of a black donkey

More recently, western vampire tales have influenced the jiang shi by introducing the blood-sucking trait to the traditional description, along with the idea of the "hungry ghost;" a mindless being that is driven solely by its ravenous needs.

MALAYSIA, INDONESIA AND BEYOND 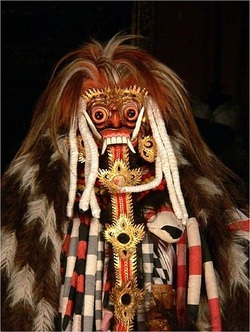 As one moves into the subregion of Southeast Asia, vampire myths begin to blend together as if tales of one specific creature spread and local people tweaked minor details of the story.  In fact, the Manananggal and Penanggal may have the same meaning as both languages share a common root in the same language family.

The Penanggal of Malaysia is extremely similar to the Manananggal in regards to it's appearance, diet (pregnant women), and choice in victims.  Like the Manananggal, it is a self-segmenting female except it only consists of the head while it's stomach and other entrails dangle beneath, shining like fireflies in the night.  While we are familiar with vampirism as a contagious disease, the act of becoming a Penanggal is either voluntarily or involuntarily self-inflicted.  A beautiful woman of any age obtains her beauty via magic or supernatural means which is usually described as being demonic in nature, thus cursing her with the transmutative disease.

Hailing from the Indonesian island of Bali, the Leyak is virtually identical to the two above-mentioned creatures, although it does share a rather similar trait with the traditional vampire that is worth mentioning.  Leyaks possess the ability to shape-shift into various animals and are able to fly in normally flightless bodies such as a pig.  They also don long tongues and sharp fangs much akin to Stoker's portrayal of Count Dracula.  Similar myths to the Leyak and Penanggal are the Krasue of Thailand and the Ap of Cambodia.

Surprisingly, Japan is practically devoid of vampiric folklore.  Vampires made their first appearances in Japanese cinema during the 1950s, most likely due to influences drawn from older vampire films such as Nosferatu and Ted Browning's Dracula.
Powered by